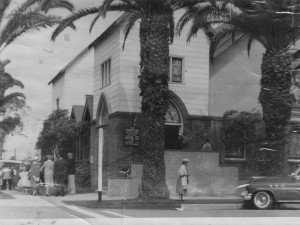 From the humble beginnings of the “Tent City” campgrounds, the Methodist Episcopal Church grew and prospered.  On April 14, 1914, the cornerstone was laid for a handsome building at the corner of 11th and Orange Streets.  W.T. Newland donated the stained glass window depicting Jesus as “The Way, the Truth, and the Life.”  The pastor at that time was W.L. Miller. 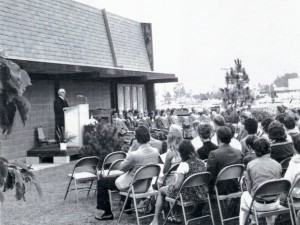 In the late 1950’s under the leadership of Rev. E.R. Folder, a study of the population needs of the area was undertaken.  A design was made to relocate to the present church site of three acres.  The property was purchased in the early 1960’s by several members and donated for use by the Trustees.  An architect was hired and two classroom buildings and the (now) Gisler Fellowship Hall (shown above) were built and occupied.  Under the leadership of Rev. E. Erny, the congregation became strong and stable at this new location.  The sanctuary was added in 1982.

The church subsequently has taken the nickname of Surf City Church.

<back to home page>